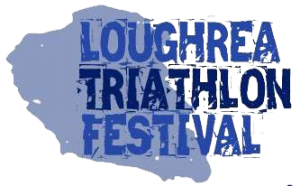 The weather gods certainly shone on Loughrea as the sell-out event took place in dry, warm conditions with some local glory in both junior races and the youth competition.

There was good competition in the 16-17 category. Predator Club had 5 juniors finishing in the top 30 home in the sprint. Tiernan Burke at 1.05.51 was the first junior male 16-17 home with Caron Ryan from Predator Club (1.12.51) first 16-17 girl home. Ben Vahey (1.06.57) and Ronan Dirrane (1.08.25) followed closely behind team mate Tiernan Burke. Predator Club, under coach Tony Daley, has a bright future, with a strong team going forward next year and more juniors coming through next year.

A new race to the event was The Corporate Relay Challenge which saw a field of 15 teams competing for the perpetual trophy. This was an exciting new event and generated great fun and interest leading up to the event and on the day. Peter Forde Physical Therapy team took the honours on the day.

Spectators enjoyed a great display of the three disciplines, starting with the 750m swim. Competition was tough and the calm water of the clear lake allowed good times. The Corporate Relay Teams and Sprint competitors were split into waves. Transition onto the bikes was busy and exciting. The Paratriathletes were first out of the water and onto the cycle course, out into the Loughrea hills. The busy sections of road were closed to traffic (many thanks to local residents who have shown great patience, resilience and support), which allowed free rein for cyclists to set a good pace. The 20km route, through open Galway countryside, returned through Loughrea and back to the lake, where competitors racked their bikes at transition and took off on the closed road run.

This was a challenging 5km course with three gradual climbs and a downhill sprint finish. The course was well marshalled and monitored throughout with plenty of support on hand; in the water, at the busy transition area and out on the course. The crystal lake and the lush green countryside provided a beautiful backdrop to a great day’s sport.

This was the largest field to date, with competitors from England, Netherlands, Australia, Malaysia and all over Ireland. The 2015 Race Programme is available here and a great selection of photos are on the Loughrea Triathlon Facebook page.

Predator Club would like to thank all competitors, supporters, sponsors and the local Loughrea Community. We look forward to welcoming everybody again in 2017.

All proceeds from the event are reinvested in the youth section of the club (www.predatortriclub.ie).